After a long period of time, I continue to write about how I traveled around Thailand. Still, I want to keep in a blog the memories of my travels, not only for myself and readers, but also for posterity. :) Today I will write about the islands of Phi Phi (Phi Phi, Phi-Phi Island). In the post I will tell you where and how I lived there, what I saw, what housing prices, etc ... As usual there will be a lot of photos. Let me remind you that before that I was in Phuket. From Phuket on the big ship to Phi Phi sailed, probably for 2 hours. On the way, beautiful sea views of Krabi province opened up. There are many mountains, "pieces of mountains" and rocks covered with fluffy green vegetation. The islands of Pi-Pi consist of two main islands, Pi-Pi-Don and Pi-Pi-Lei. 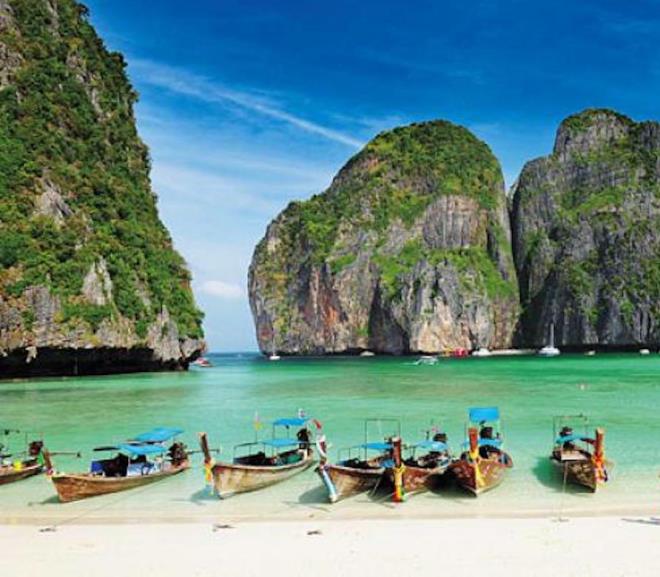 Immediately, all arrivals are taxed at the entrance to the island - 20bat. Reserve all matters. Some are outraged and pass without paying. I paid, I do not mind. Passed a little further. Here begin to pull the "Thai realtors" and offer to pick up and rent a house. Many offers with photos, but the prices are clearly too high. Offers for rooms and bungalows started from 700r day. Before I floated here, I read blogs and knew that the island is small and you can quickly get around on foot and find suitable housing yourself. He did.

Phi Phi Don is a populated island. They brought me here by ship. First settled in a bamboo bungalow for 600 rubles / day. Very light, breathable and pleasant. Shower, toilet, bed - everything is ok. The only thing that didn’t work for me was the bad internet. The next day I moved into a room for 500 rubles / day. Here the Internet is good, the shower and toilet are common, but the ass is that the house was built as it was and it was unbearably hot in the afternoon. The blessing was a balcony with tables and chairs - there I hung out when I had to sit on the Internet. No pictures of housing - it seems, I forgot to shoot. Accommodation here is also for every taste there. Prices found from 300r. per day. The infrastructure of the island is not developed. Narrow streets. No cars, no bikes. Only mechanical and electro-great. But they, too, I think, are not needed. Comfortable to move "on their feet." Local policemen, by the way, have bikes. It is ridiculous to observe how they move between crowds of people with the speed of a bicycle. Accelerate here absolutely nowhere. Most of the island is occupied by the market, the crates, bars, restaurants and massage parlors. The rest of the - guest houses, houses, bungalows. The main evening party and discos are held on the beach. The party here, by the way, is quite powerful. I liked it much more than on all other islands.

And so, we landed on the Bamboo island. There is very clean, clear water. There are no houses here. You can not stay.

There are as many as 3 vivpoint. The highest point of the island is 314 m ... Up the concrete stairs. Heat and sweat. It's good that at the very top there is a shop where you can buy some water. Reached, drink water and admire the beautiful views from a height - an awesome pleasure. By the way, they took 20 rubles from me too. Ratcheting :) In 2004, the island covered the tsunami. About 2000 people died here. Another 1,200 are missing. I now do not understand. How so? Was it really impossible to evacuate everyone to high points ... Well, okay. That was, that was.

Not deep. Vodichka good, clear, warm. But it was not always so. Often at high tide, the water was dirty, and did not want to swim.

Pi-Pi-Lay tour and other places

When I studied Pi-Pi-Don, I wanted to see Phi-Phi-Lei. Bought a tour of the most popular places in the area of the islands. I do not remember the price (about 400r). The places that I visited also began to forget, and the guide somewhere was lost. The tour route was like this: Shark Point - Monkey Beach - Bamboo island (Thailand) - Viking Cave - Maya Bay (Phi Phi Lay) The tour began in the morning. Swam on a boat to the first point, which was called Shark Point. There was snorkeling (tube, mask. You swim on the surface of the water and watch the fish and the bottom.) Not impressed. There were not many fish. Then came the island of monkeys - Monkey Beach. A small beach with clear water, tourists and many monkeys.

We hung out here for about an hour and swam in the direction of the house. On the way we met dolphins. The captain began to pursue them, and we all tried to photograph them. I never managed to take a picture of a dolphin when he jumps out of the water... My neighbor took a picture of how a dolphin jumped out of the water, and a sunset in the background. Lucky. And I took the sunset separately. In the boat talked with the Portuguese. Good guys. They advised me to buy a waterproof bag in which you can put your phone, camera, etc. They were very surprised that I would transport the whole thing in my hands and am not afraid to get wet. In fact, rain or waves can spoil the life of a vehicle.

I walked around the market and bought a bag in which not only my camera and cell phone would fit, but also all my things along with the backpack, which had already begun to break :) What a trifle. Backpack is good. Strong straps, pockets, and a department for the laptop is provided. I didn’t get into the rain with her, but once I was swimming in a kayak, and it was completely flooded with waves. Check has passed - everything is dry. In general, I lived on the island perfectly. After 4 days it became boring, I wanted to see new places and I went further ... I will write about this sometime later ...) I will try to write about my business in the coming days. Thanks to everyone who does not forget about me. Sorry to forget about you.