After 17 days in Pattaya, I decided to look at Phuket. For 848 rubles I bought a ticket here in this office and the next day I arrived at the landing site. The bus was supposed to leave at 19.00, but broke down. Thais fussed, ran around the bus, drove for some spare parts and, after 2 hours the bus was ready to take us on board. We drove 14-15 hours, I do not remember. Time somehow flew by strangely. I watched movies on my laptop, slept, ate fruit, watched beautiful landscapes along the way - I did not miss. The bus brought me to Phuket Town (Phuket Town) - the administrative center of the island of Phuket. It is also called the city of Phuket. 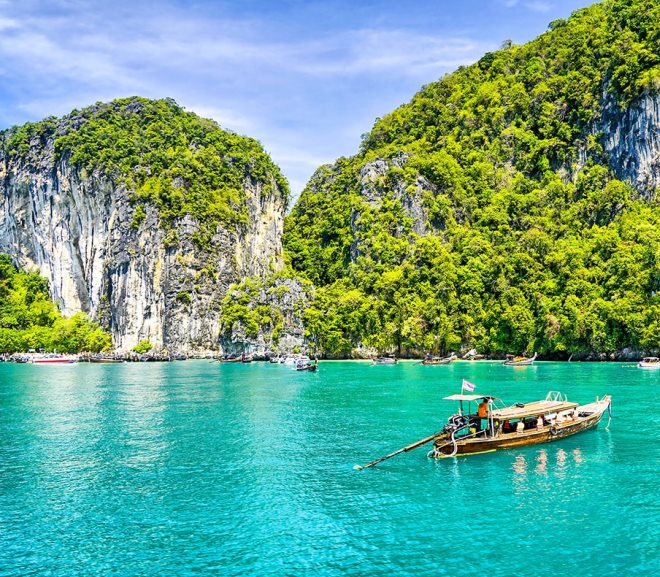 There are a lot of houses, cars, people and it is located far from beautiful beaches. Since I wanted to live near the beach, when I got off the bus, I began to look for a motorcycle taxi to get to Karon Beach. I read on the forums that this is one of the most beautiful beaches in Phuket. Taxi drivers at the bus station broke up 600 rubles, then dropped the price to 300, but I, waving my hand, went farther into the city. Passed about 5 minutes and met the taxi drivers. One of them took me for 150 rubles.

Every day a maid came to get out. I told her to come in a day, since I “do not have time to litter”. The room is so pretty clean, and if you consider that I was in it basically just to sleep, then it was not necessary to clean in a day. The maid was surprised and very grateful. There was a telephone in the room - you can call to order food and drink in the room. Also in the fridge, I constantly reported products if I ate them. In general, the service was pleasant. If you are looking for cheaper accommodation, then you need to look for it in Phuket Town. There you can rent a guest for 300 rubles. I think there will be cheaper.

I stayed near Karon. The water there was calm in principle. But there was one day when the waves were unreal big.

First day at about. Phuket I, tired of moving and searching for a room, slept off. The next day, it rained for half a day, so I sat down for a little laptop, worked. On the third day I decided that it was time to go somewhere, but to do this, either bass for a taxi or rent a bike. I went on a bike only once in my life. I wrote about it here. Therefore, I chose a taxi for traveling ... But, I didn’t go anywhere, I killed time and, having broken a bit, changed my mind in the evening and took the orange Honda Click for six days. The hotel guests rent it for only 150 rubles / day. In order to get used to the bike and not immediately get into a large flow of transport, I left at 4 am. I studied the map at home and traveled from memory in the direction of viv-points (the highest points of the island). Driving was not as difficult as I thought. Could sleep a little longer :) The only problem that has arisen is that I am lost. I was driving at random, not understanding where I was going and why :) But I didn’t sweat. I was warmed by the idea that I practice riding a bike and watch beautiful landscapes :) At such moments you feel real freedom. You are not in a hurry, do not owe anything to anyone, thoughts are free from problems, doing interesting work in an interesting place. The wind blows on the face, the sunny weather improves mood. Just go and enjoy. Romance. All the same, soon this idea flew out of my head, I was hungry and tired of sitting on the bike. Then I went to the seven-eleven store and bought a large detailed map of Phuket for 199 rubles. It was not much easier to go around the map. But still, with the card you will not get lost. In general, I rode all day until 20 o'clock. I took a lot of photos, I saw a lot of interesting places and beaches. Phuket is the largest island of Thailand. When I asked the taxi drivers, "How much will it cost to drive around the whole island," they said that it was impossible, and no one would be lucky. There are many beautiful beaches and interesting nature. But to go round everything is not an easy task. I rode a few days and saw enough. To write about everything in one post is unrealistic, so I will show you a photo and describe some places. I'll start with the beaches.

At first I had an idea to write a post on the beaches of Phuket. I traveled to the beaches, photographed, marked them on the map. But then I saw that everything was already in runet, and left this idea. Here, for example, all the beaches and their location are described. Most of all I loved Banana Beach and Surin Beach. But everyone else is good too. The roads in Phuket are excellent. Traffic is not as much as in Bangkok or Pattaya, but near the cities, the order of transport. In the following days, I always went somewhere - swim, find interesting places, just ride. He traversed the floor of Phuket. Vivpoints were especially remembered, the airport (I watched the planes get on and off), the butterfly garden, which I accidentally got into. It is very cool to swim in such waves. Flew on a parachute attached to the boat. I gave 1500r. Interesting, but not as much as I thought. The second time I realized that I had no fear of height at all.

I stayed in Phuket for 8 days, and then took a one-way ticket to another island. Where did I go? (who guesses that $ 10 ^^) In the next post I will tell you where I was and what I saw.